BRAWL THIS FALL AT THE DONNYBROOK
The Donnybrook is a one-day lacrosse tournament for boy’s travel club, high school , & y Liggett School in Grosse Pointe Woods  Michigan is one of the states best facilities. The grounds feature forty acres of new field turf.

BRAWL THIS FALL AT THE DONNYBROOK

Teams will compete against the regions’ best in a one-day championship
&amp; round-robin format at the one of the best field turf venues in the region!
This event is hosted by 313 Lacrosse LLC. Founded in 2005 313 is
widely known for lacrosse excellence in travel, training, retail and events.
313 is privileged to have access to the University Liggett School Athletic
Complex, in Grosse Pointe Woods, Michigan. ULS is amongst the best
facilities in the Midwest. The grounds feature four acres of new field turf,
a perfect venue for Fall Ball.
Games are played with a safety-first mandate. Fall rules are in effect
with no takeout checks or one-handed stick checks allowed. Rules will
be strictly enforced. A code of conduct is appreciated by all players,
parents and coaches. 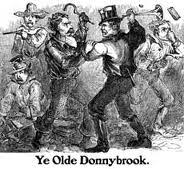 Definition: don·nee·brook // noun // a scene of uproar and disorder